Linux.com has a thorough review of several rescue LiveCDs in different rescue scenarios.

NewsForge has an overview of FreeSBIE, a BSD based LiveCD.

ReviewLinux.Com has reviewed PCLinuxOS Preview 9. Read it and become familar with PCLinuxOS.

The first OpenSolaris LiveCD has shown up on FrozenTech’s LiveCD List. It currently has no GUI, but it can be installed to a hard drive.

DistroWatch has a bittorrent link to the new Knoppix 4.0 DVD released a few days ago at LinuxTag. Note that this defaults to German, so use the lang=us switch for English, and be aware that the official release may differ from this one.

Also, screenshots (because 4 Gigs takes a while to download).

Kyle Rankin, author of Knoppix Hacks and Knoppix Pocket Reference for O’Reilly, has the scoop on the new Knoppix 4.0 DVD. Looks like the official download is not here yet, buy maybe someone will put the DVD on bittorrent.

NewsForge has a review on Freeduc, a LiveCD geared towards education and students.

The true gem of the distribution is GCompris, an educational suite that contains more than 60 educational applications, ranging from mouse games to a chess tutorial.

Last week PCLinuxOS released Preview 9 of their high quality and popular distribution. Check out the Release Notes for some of the improvements.

OSDir has added screenshots for the new PCLinuxOS Preview 9 and for Xarnoppix 3, a LiveCD based on Knoppix.

Heise online is reporting that Knoppix 4.0 is done, and that it will be distributed this Wednesday at LinuxTag 2005. The 4.0 release is when Knoppix will be split into a CD and DVD versions. The DVD version will include 5,300 applications, two books about Knoppix, and the kitchen sink.

Germany’s Federal Office for Security in Information Technology (BSI) has developed a free, open-source tool that allows public and private sector organizations and companies to test the security of their networked systems, the agency announced Friday.

It’s based on Knoppix, and they have a link to download the ISO. Read more here: 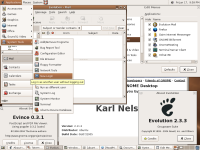 NewsForge has another article in their My Workstation OS series. This one focuses on the LiveCD Kurumin Linux, providing information that I was not aware of, such as its large script collection.

In fact, one of the highlights of this distribution is its extensive use of scripts. Kurumin comes out of the box with more than 400 small scripts –- most of them embedded in Clica-Aki, Kurumin’s Control Panel -– aimed at making easier some of the usual configuration tasks such as setting up a server, installing softmodems and wireless adapters, and installing new software.

Self SEO has an article introducing Knoppix, what it does well, and some suggestions for improvement by the author. Overall a positive article on a great LiveCD.

With no need for an installation (although that is given as an option), and with excellent hardware detection, Knoppix has single-handedly done away with the two major concerns for Windows users wanting to try out Linux

I just put up some benchmarks comparing the boot times of a dozen LiveCDs on FrozenTech. You can see the results here: FrozenTech LiveCD Boot Benchmarks: Round 1, Popular LiveCDs

This article originally posted on frozentech.com on June 15th, 2005
One of the most obvious differences between a LiveCD and an operating system installed on a hard drive is the time it takes for the system to start. LiveCDs have the disadvantage of all CDs, easily being 15 times slower in both transfer and access speeds than standard hard drives. Even with this huge variation in speed, the average LiveCD does not take 15 times longer to boot than the same software installed to a hard drive. This article will provide an overview of the boot speeds of nine popular LiveCDs in several different configurations.
END_OF_DOCUMENT_TOKEN_TO_BE_REPLACED

In addition, due to the fact that a PC in a factory may be subject to electrical and mechanical shocks, we feared extended down time in case of hardware failures (especially the hard disk’s), and we wanted to avoid reinstalling everything.